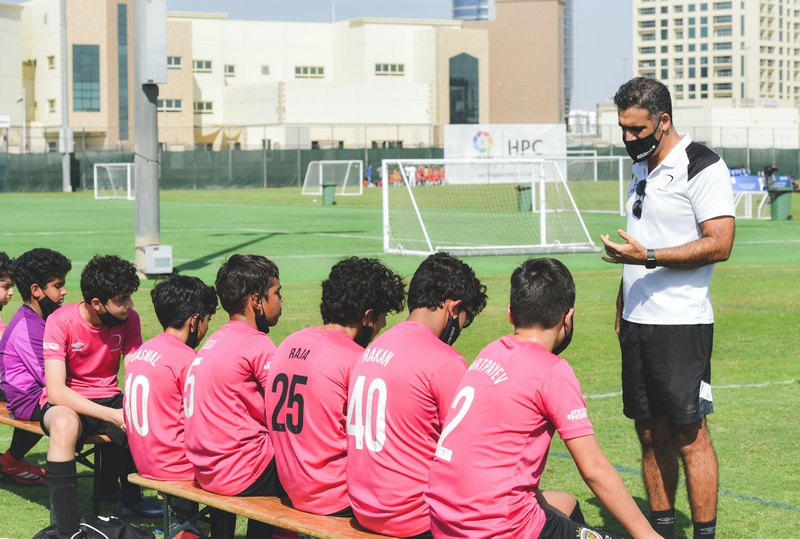 The mistakes of professional athletes don't appear out of the blue, and all that skills, incomparable goals, extraordinary artistry and mistakes that we see at the stadium or on TV are the result of several years of learning football in childhood.
One of the constant delusions of children's coach is to impose his own style of play, own sport aggression, own vision of football for the child. This can be expressed in constant prompting from the coach's place. Where to run, what to do, how to kick and so on. It is high time to understand that the overwhelming majority of the coach's comments will not be heard by the player, and everything that reaches him will only unnerve him. A small player, of course, will not reach everything on his own, but an advice should not interfere with the manifestation of his personal qualities, his own ideas. Scolding a child that he going into a dribble instead of passing, the coach must realize that he will not bring up the new Cantona, Ronaldinho, Zidane or Ibrahimovic.

There is also a very big misconception in youth football and it is associated with the practice of playing with both feet. It is not just about the ability to kick the goal with an uncomfortable foot or take the ball with it - here I am considering the question when people argue about whether it is necessary to bring to automaticity both ball receiving and passing and dribbling of a player with his uncomfortable foot. Often, from the coaches, I heard that, they say, Ribery or Messi play with one foot and do an excellent job. But, if you look really closely at the play of such stars, you will see that their second leg is very developed and is capable of both helping the leading leg and independently performing the role of the leading leg. It is enough to analyze in more detail the individual actions of the players. The "two-legged" player is more versatile, flexible, coordinated, capable of changing dribbling in any direction and with any resistance. This player quickly coordinates his legs for a pass if the ball bounces unexpectedly or rolls in a difficult trajectory. And, again, the game of less skilled athletes is perfectly visible, who automatically reach for the ball with a leading foot at any moment and find themselves either with their backs to the game, or forced to take an extra step, or pass back, which naturally affects the speed of the game in general and interest in her from the fans.

I think that one of the mistakes of children's football coaches is the excessive use of the demonstration to explain the exercise. It is easier, faster, more efficient at first glance. Children understand the point of the task faster, but there is a very significant drawback. Football youth players cease to be absolutely perceptive and begin to "sleep" to the mentor's speech. And in those cases when you do not have the opportunity to show clearly what you are trying to explain - children will miss the information. For the experiment, try to practice verbal explanation of the task in the team where the children are used to see visual explanation: you will not succeed. As soon as you start the exercise, you will realize that most of the children did not understand it. So, verbal communication and perception cannot be dispensed with as long as the pre-match setup, adjustments during the half-time of the match, theoretical lessons and individual conversations are necessary.

The next misconception is whether to train with one coach or change them once a year, two or three. Many children and parents stick to one mentor and train for many years with one coach. I think this is a big mistake. Firstly, each coach is better able to work with some one age of the guys. Someone is better at getting along with the younger ones, calmly reacting to their noise and din. And someone knows how to better motivate elders for serious and professional work in training and games. The "new" coach looks closely at each player, sees the players in different positions than the coach before him. Selects other words to explain the meaning of the game, exercise. Thus, the experience is transferred to the players by different words, temperaments and exercises.

The next mistake of children's coaches, which can put a final to a child's career, is the desire to win, the observance of the interests of the team rather than the player. I often see games where, in addition to the main squad, the same number of players sit on the bench, or even more than the squad on the field. The most important thing that gives growth to a player is playing practice. Everyone should receive the same playing time in a team. Confirmation of my words is the example of the work of Ajax Amsterdam academy, where all players, regardless of the result, play the same time. Or the competition regulations of a number of countries do not allow a player to play less than half a match. The coach often keeps a player in the team who is clearly stronger than the level of his team. But he does the result, no way without him. The player degrades in such an environment and he needs to set a new challenge, but the coach does everything possible to keep the player in this team longer. Or the same topic: many coaches mainly correct the actions of the weakest players in the team, occasionally paying attention to the strong football players and asking less from them. This is another easy way for a talented player to rest on their laurels and slowly degrade. In my experience, only constant stress and the goal of catching up the others allow a player to achieve serious results in sports.

One of the biggest mistakes a coach makes is trying to prompt and correct the players' actions during the exercise. All at once or one by one. There he will say something, here he will shout: from the side it seems that he is controlling the process. But the players don't take such advices at all. It is very important that the player understands what is being said and hears it. The situation from my own experience: during the training session with the second coach, the players' attention was focused on the movement of the shin during the passing. Several times and more than a dozen times it was said about the shin: move with the shin, the kick with the shin is like that .. Until one of us asked the children to show where the shin is. Only a couple of guys knew what a shin was. So that case we stopped the exercise and found it out. But what if we were just correcting the players by telling them about the shin during the training? Conclusion, it is always better to let the players complete the task, see mistakes, interrupt the exercise, clarify the shortcomings and send the guys back to do the task. It's much more productive this way.

And, finally, I will talk about another mistake of youth football coaches - to train players without being tied to a specific position on the field. This is not about giving the player a playing role from a young age and only training it, no. I'm talking about the pointless training of football technique in isolation from a specific position on the field. Receiving the ball in motion, receiving with a turn, receiving with a dribbling, a shot on goal or a serve from the side - the player will quickly master the material correctly if you tell why he is training it. And this can be explained only by placing the player in a specific playing position on the football field and appointing him as a defender, striker, and so on.