The Slovak Republic is a state of Central Europe, with a natural mountainous terrain of the Tatras and a large river the Danube, defining the borders of the country and connecting the capital Bratislava with the neighboring cities of Europe – Vienna, and Budapest. Near Slovakia are Hungary, Poland, Czech Republic, Ukraine, and Austria.

Historically, there are four main stages in the development of Slovakia: the period before the Hungarian rule from the 10th century when from the 5th century Celts inhabited the territory of Slovakia, and from the 9th century it was created Great Moravia, a state that united the two principalities on the Morava River, and later a part of the modern Czech Republic. During this period, an important fact comes true – orthodox priests Cyril and Methodius in the 9th century converted the Slovaks to Christianity.

The era of the Hungarian and later Austro-Hungarian rule until 1918;

The period of independence of the Slovak Republic on 1 January 1993.

In the early 10th century, during the constant raids of Magyars, the Great Moravian Empire was weakened, gradually disintegrated and joined the new Hungarian Kingdom. Slovakia separated from the Czech and Moravian lands, came under the rule of the Hungarians, and from the 14th century under the Austro-Hungarians for almost 1000 years! The Slovaks were deprived of any rights as part of a foreign Kingdom, another language; faith and culture were imposed on the territory of Slovakia. The people of Slovakia were deprived continuously of nationalism and repression.

In the 11th-13th centuries the German colonists appeared on the territory of modern Slovakia, they brought new technologies and knowledge; they built many castles, which served as centers of territorial units – the Committees.

In the course of history, there was a period when the Ottoman Empire dominated in the territory of Hungary for 175 years. Accordingly, the Slovaks also felt all the "charm" of being under the rule of the Turks. In 1685, the Turks were wholly expelled, and 50 years later Maria Theresa, known for her reforms and development of the state, ascended the Hungarian throne. The changes of the army, church, education, and legal system contributed to the fact that the Slovak people achieved more freedom and the right to enter into local self-government. In 1781, serfdom was abolished in Hungary.

Only after the First World War in 1918, Slovakia gained greater independence and rights as part of the new state of Czechoslovakia.

In 1993, the Slovak Republic gained independence for the first time. It was the first period of freedom of the Slovak people in the history of the state. Up to this point, independence was in the period of the principality of Great Moravia from 833 to 907 and a short period from 1939 to 1944 during an artificial friendship with Nazi Germany. For the rest of the period, the Slovaks lived under the hgs of various states and rulers and had no rights and freedoms.

Bratislava is the capital and the largest city of Slovakia. At different times, different rulers gave new names to this major trade center: Pozsony, Pressburg, Prespore, Istropolis, and Bratislava. The symbol of the city —Bratislava Castle — pompous, monumental castle, a quadrangular shape, towering over the town on the left riverside of the Danube! Climbing up to the terraces and its towers, you can see the beautiful view of the city and the surrounding area. Inside the fortress, there is a Museum. 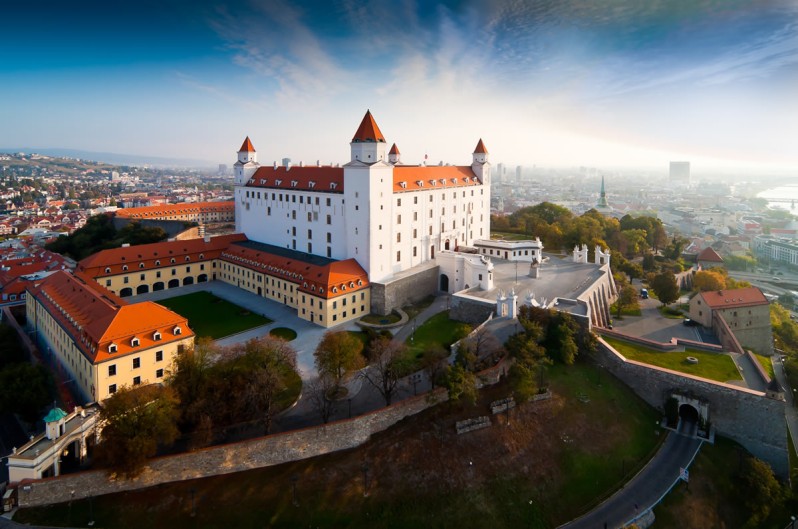 Another bright attraction of Bratislava is the Cathedral of St. Martin of the 13th century, made in the Gothic style, where all Hungarian monarchs were crowned. Although the Cathedral began to be built in the 9th century, when it was part of the city fortifications, it was consecrated only in the middle of the 15th century. It is one of the largest churches in Slovakia. 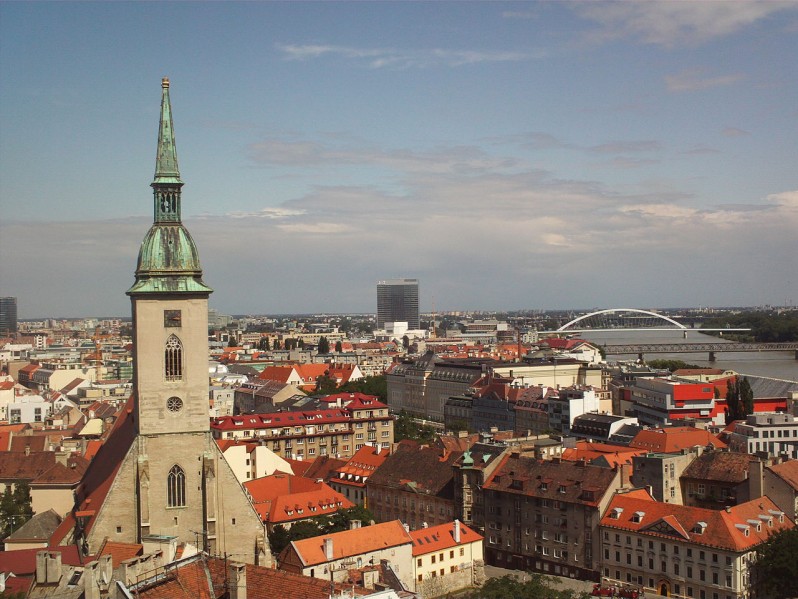 The old town of Bratislava is home to a lovely and charming historical center, whose narrow streets and 15th-century architecture lead to the Old town Hall and the Presidential Palace, named the Palace of Grassalkovich after the owner and friend of Queen Maria Theresa – Anton Grassalkovich.

Not far from Bratislava, where the confluence of the rivers Danube and Morava, is an ancient Roman castle Devin, built in the IX century. Currently, here you can explore what is left of the fortress, well; adults will be attractive to go down to the village of winemakers, which is located just at the walls of the Devin castle. 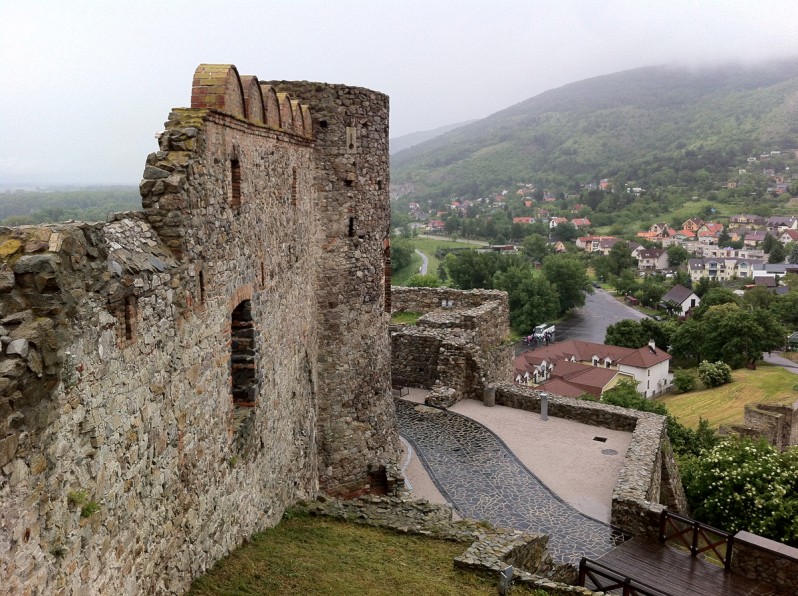 Thirty kilometers from the border with the Czech Republic is one of the most valuable and oldest buildings in Slovakia – Bojnice castle, which rises on the city hill. The first mention of Bojnice castle appeared in 1113. A vast number of beliefs gave this structure the glory of the Haunted Castle, where in the summer even hosts an international festival of evil spirits. 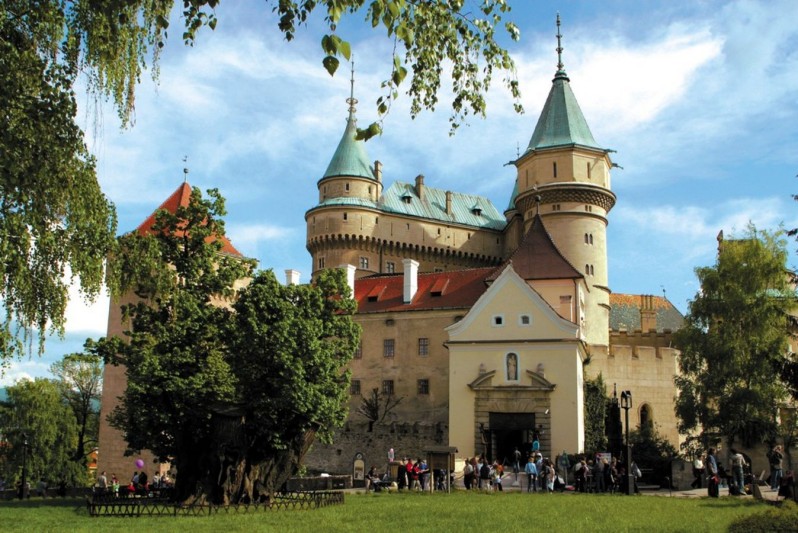 A short distance from the town of Poprad settled Kezmarok castle is the main attraction of the ski resort of the High Tatras. 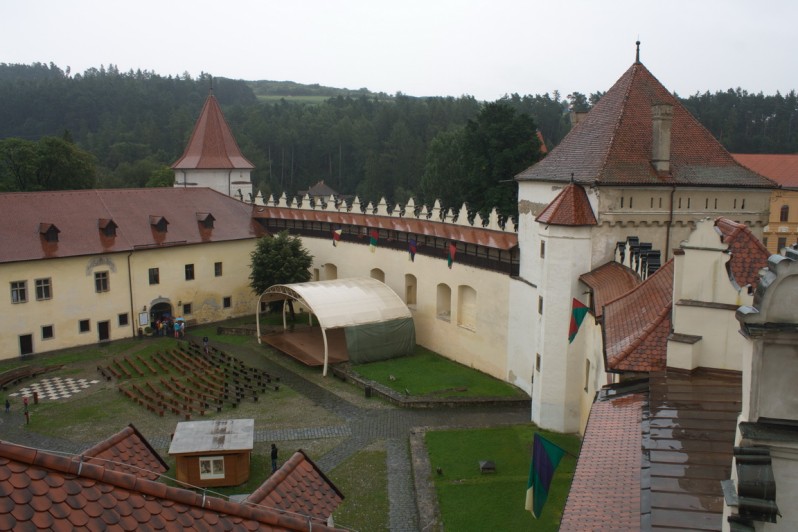 And next to the Slovak town of Ruzomberok is the Orava castle — a fascinating building, which is located on the riverside of the Orava on a cliff height of 112 meters, resembling a bird's nest, for which it was dubbed "Eagle's Nest." On the hillside lies another attraction - the City of Bardejov, which is considered the most beautiful city in Slovakia. UNESCO has taken under his patronage Bardejov for the well-preserved ancient monuments. 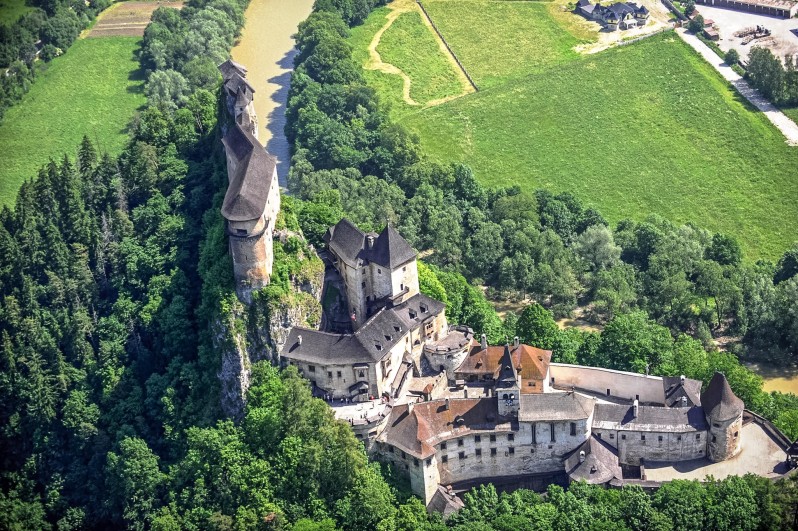 One of the most famous and remarkable castles in Slovakia is the Spis Castle, which is immediately visible from the road on the way to Presov. The rich architecture and history, the interior of the Spis Castle, the location on the rocks at an altitude of 200 meters – all this attracts thousands of tourists from around the world! 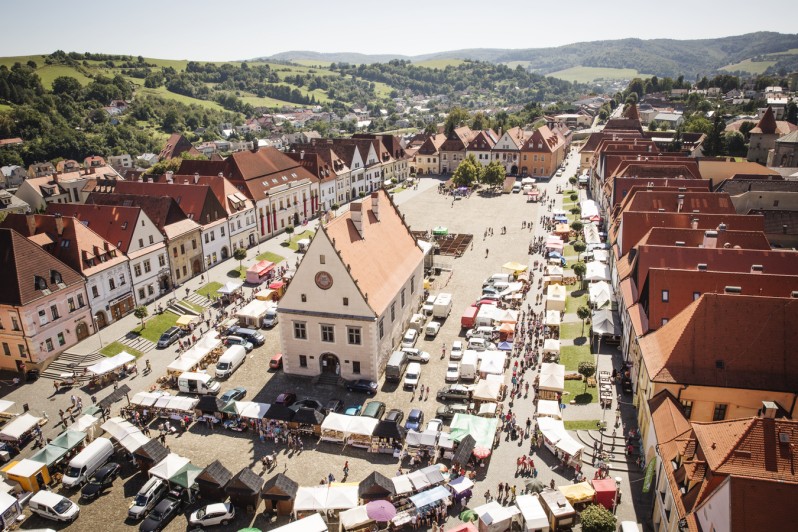 Another unique attraction of Slovakia – Trencin, and the Trencin Castle! The town and castle in the West of the Slovak Republic, which was first mentioned in 1111, but there is strong evidence that it was built much earlier. The ancient inscription on one of the walls of the castle is widely known, which says that in 179 as there was a Second Roman Legion.

Trencin and its castle, located at the top of a cliff above the town, are on the Vag River. In the castle, there is a museum of ancient weapons and art gallery, and archaeologists constantly replenish the collection of finds that are exhibited here.

Near the town, you can visit the resort with curative sulfurous springs - the SPA of Trencianske-Teplice. Here will welcome guests who wish to enjoy baths Hammam in the Moorish style.

Besides, the sights of Slovakia should include a vast number of mineral springs and caves, where excursions are organized, and in many places built resorts and sanatoriums. Across the country more than 4 thousand caves and thermal springs, among the largest – Demanovska cave system, the Belianska cave, Dobsinska ice cave, and others. 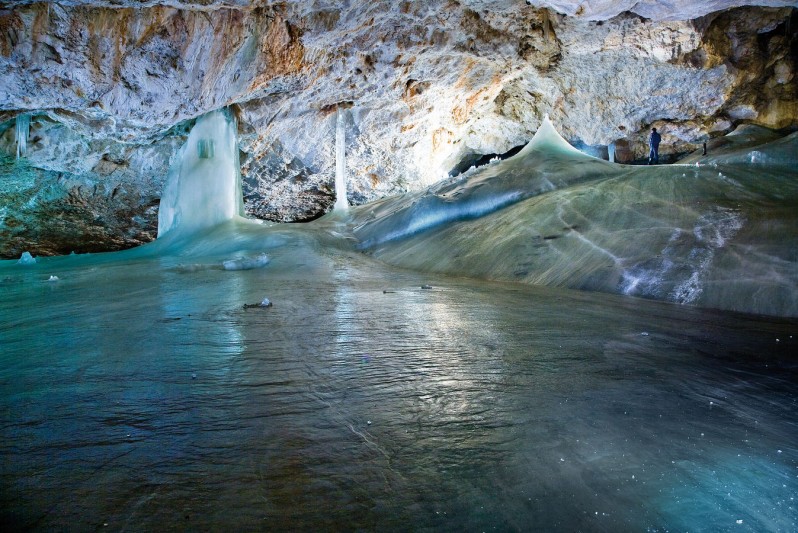 The capital of Slovakia Bratislava is the only capital in the world, which borders with two countries – Austria and Hungary. Bratislava is very close to Vienna – now there are trains, and until 1945 there was a regular tram.

Hockey is very popular and developed in Slovakia! The world record for the number of goals scored in one match belongs to the women's hockey team of Slovakia - 82 goals against Bulgaria in 2008.

Moreover, the players of the men's team "Slovan" still have a fun tradition. Before each game, hockey players for good luck put the clubs in the toilet - it is believed that they will score.

An interesting fact is that Slovakia does not have the usual worldwide traditions of meeting the New Year and Santa Claus. At the beginning of the New Year, a carnival of hell is arranged – Krampuses!

In the Slovak language, some words and sentences consist only of consonant sounds, for example, “Krt zdrg skrz trn, zprv zglt grst zrn” – “Mole ran away through the thorns, first swallowed a handful of grains."

The famous Slovakian, record holder of the Guinness book of records - Countess Bathory. He became famous as a serial killer and the worst maniac among women in Europe, who lived in the 16th century in the Sahtinskiy castle, where her restless spirit still wanders. 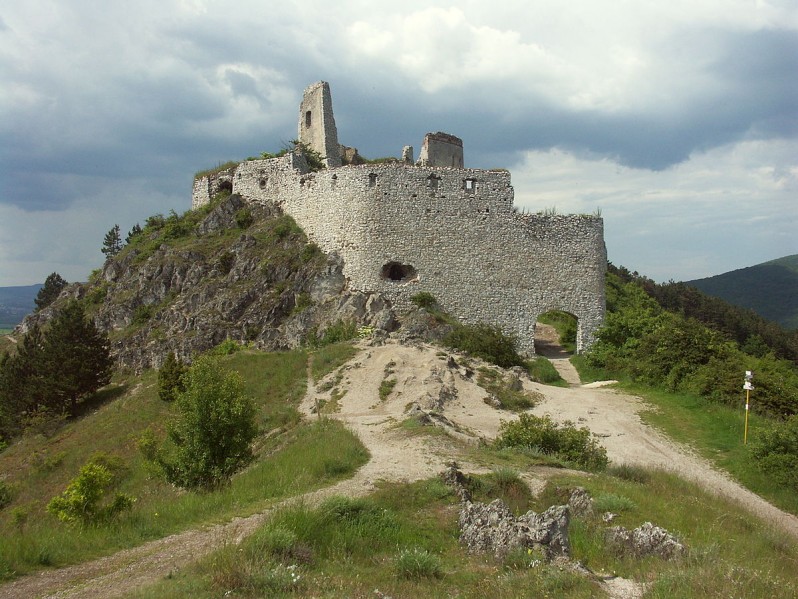 Selmentsi – a village in Slovakia in the revision of the borders after the war was divided in half – one part of the town is now in Slovakia, and the second is on the territory of Ukraine!

Tourists often confuse Slovakia with Slovenia. Also, no wonder, because in Slovak country names differ only in one letter. Slovensko is Slovakia, and Slovinsko is Slovenia. Be careful when communicating with Slovaks and Czechs!

One of the brightest historical heroes of Slovakia was Móric Beňovský, 1746-1786 - a nobleman, traveler, naturalist, explorer - in 1776, the inhabitants of Madagascar chose him as his King!

Slovakia has a temperate climate. The average temperature in winter is –2°C, in summer to +21°C. In Slovakia, there are many ski resorts, which are not inferior to the quality of the slopes of the Austrian and Swiss resorts but surpass them in accessibility.

The largest airports in Slovakia are in Bratislava, Kosice, Poprad, and Zilina. Besides, you can choose larger airports in Vienna or Budapest.